June 3, 2019 (Steven O’Reilly) – For those who have followed Roma Locuta Est for any length of time, you may have noticed on the “about” page or in the writer’s bio at the bottom of each article that I have been writing a historical-fiction book — or actually a trilogy. The first book, finally(!), should be released this coming August or September 2019.

The title of the trilogy is Pia Fidelis. The first book of the trilogy, The Two Kingdoms, begins in the Roman Empire of 351 A.D. At that point in history, the Roman Empire — divided East and West — was on the eve of a great civil war, and the Catholic Church was beset by the Arian heresy. It was in this period, there arose Julian, who came to be known in history as the “the Apostate.” The character of Julian will figure prominently in the trilogy. In fact, I wrote an article on this blog last year which touched upon his life (see The Historicity of Miracles: The case of Julian the Apostate and a lesson for our time).

I and many commentators have likened our times, i.e., the current controversies within and tribulations facing the Catholic Church, to the times of the Arian controversy. Thus, it is not a coincidence that this historical setting was chosen for the Pia Fidelis trilogy.

Today, I am very happy to announce and reveal the cover for book 1 of Pia Fidelis!!! 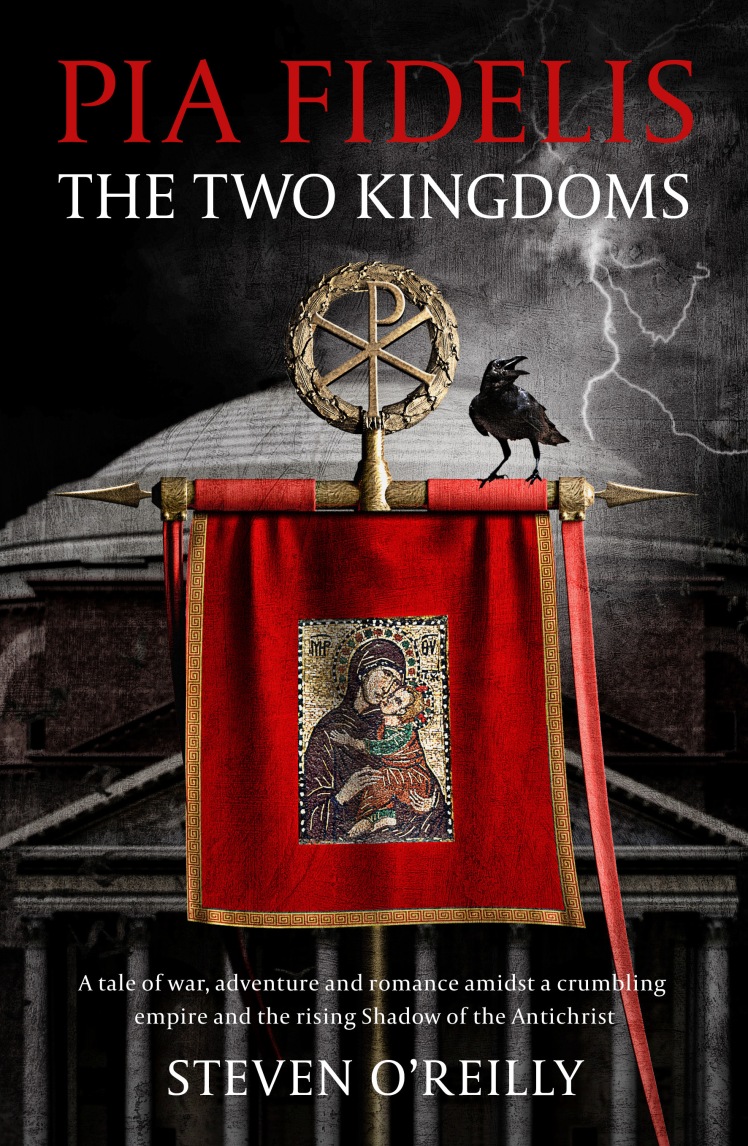 Here is a general description of Pia Fidelis and The Two Kingdoms:

PIA FIDELIS is a historical-fiction trilogy which tells a tale of war, adventure and romance amidst a crumbling empire and the rising Shadow of the Antichrist.

PIA FIDELIS begins in 351 A.D. as civil war looms over the Roman Empire and the Arian crisis rages within the Church. In The Two Kingdoms, a Western Roman military tribune, Septimus, must overcome betrayal as he fights against all odds in a civil war that threatens his return to Rome and the woman he is to marry. In Constantinople, Melissa, the daughter of an Eastern Roman general, attracts the attentions of prominent members of the court, including those of Emperor Constantius. Her heart is broken when a plan is hatched to marry her against her wishes to a man she does not love.

In the meantime, as Constantius plots to impose Arian beliefs upon the Church, his cousin, Julian, begins to follow a sorceror who is seemingly able to conjure the ancient gods of the Greeks and Romans…and from these spirits, Julian learns of their great plan for him.

In The Two Kingdoms, destiny begins to set the paths of Septimus, Melissa and Julian on a course that will one day intersect…

PIA FIDELIS: The Two Kingdoms will be released in August-September 2019. To get updates on Pia Fidelis, I ask you to PLEASE follow the Pia Fidelis Trilogy website (www.PiaFidelisTrilogy.com) AND also to follow updates on twitter at @FidelisPia.

Pia Fidelis has been a labor of love. If you are so inclined, I ask you to please retweet news about it, and ask your friends to retweet about it as well, ad infinitum — and please share on Facebook!  Please check for updates, following both the Pia Fidelis website and following Pia Fidelis on twitter @FidelisPia.

Steven O’Reilly is a graduate of the University of Dallas and the Georgia Institute of Technology. He has served in the Central Intelligence Agency, and currently works in private industry. He and his wife, Margaret, live near Atlanta with their family. He has written apologetic articles for This Rock and is working on a historical-adventure trilogy, entitled Pia Fidelis, set during the time of the Arian crisis. The first book of the Pia Fidelis trilogy, The Two Kingdoms, should be out later this summer or by early fall 2019 (Follow on twitter at @fidelispia for updates). He asks for your prayers for his intentions.  He can be contacted at StevenOReilly@AOL.com (or follow on Twitter: @S_OReilly_USA).

In the Light of the Law